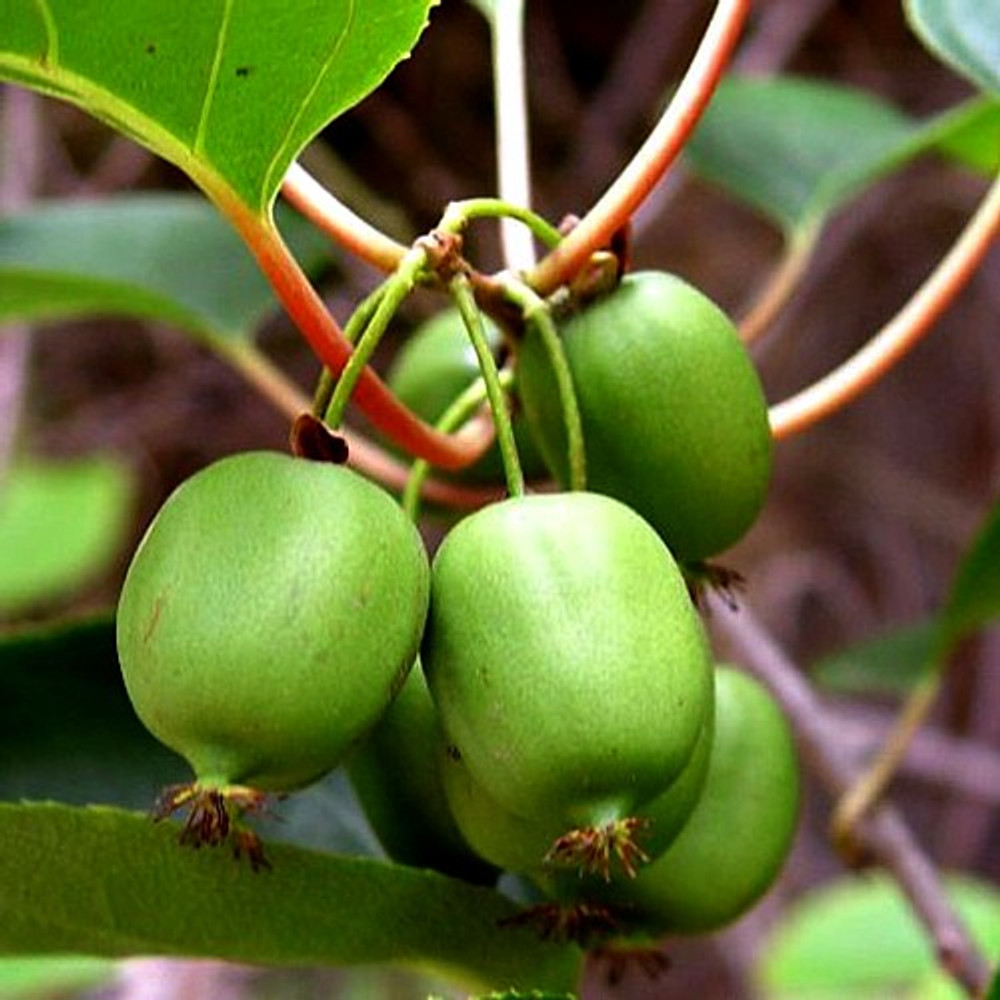 The Hardy Kiwi is THE FRUIT OF THE FUTURE. Fruits are now being marketed and sold in produce stores. It has been accepted in the marketplace and the demand will be growing in the very near future for the small delicious fruits.

The Hardy Kiwi, are native to the mountains and hills of southwestern China where they grow wild in trees and on bushes. The Hardy Kiwi was introduced to the United Kingdom, Europe, United States, and New Zealand between 1900 to 1910 from China. Commercial plantings were made in New Zealand about 1930 and have become widespread over the last 20-30 years.
These plants have been tested in New Hampshire and upper New York State where they survived 25 degrees F below zero temperatures! Kiwi plants are attractive growers that require a sunny location, preferably with wind protection. They can be grown in different types of soils; however, the soil must be well drained. The vines take very little maintenance-just pruning and support to hold about 100 lbs. of fruit for a mature plant. Plant 10 to 20 ft. apart. They are hardy in zones 4-9.
Kiwi plants are very pretty when used to cover a wall or fence or used in landscape design. The fruit is very high in Vitamin C and its use in recipes is endless. The hardy Kiwis ripen in mid to late September. Growing instructions included with each order.

Actinidia arguta Issai is unigue self fertile female kiwi vine with tasty fruit the size of a large grape. This cultivar can produce abundant crops in the absence of a male pollinator, often in the first year after planting. It is a climbing plant, supporting itself by twining around branches and a fast grower maturing at a length of to 12 feet. A very hardy plant, tolerating temperatures down to -20°F, but the young spring growth is susceptible to frost damage. In spring, it produces fragrant white flowers. A self-pollinator, it bears long fruit to 1 inch in diameter. Fruit is sweet with a good flavour and high quality. It ripens in September and contains up to 5 times the vitamin C content of blackcurrants. The fruit is seedless when it is not pollinated. This vine is worth growing for its nice foliage alone and the fruits are an added bonus. Actinidia arguta prefers a sound loamy neutral soil in a sheltered position. It tolerates acid and moderately alkaline soils. Succeeds in semi-shade but full sun is best for fruit production. Fruits are formed on second year wood and also on fruit spurs on older wood. Any pruning is best carried out in the winter.