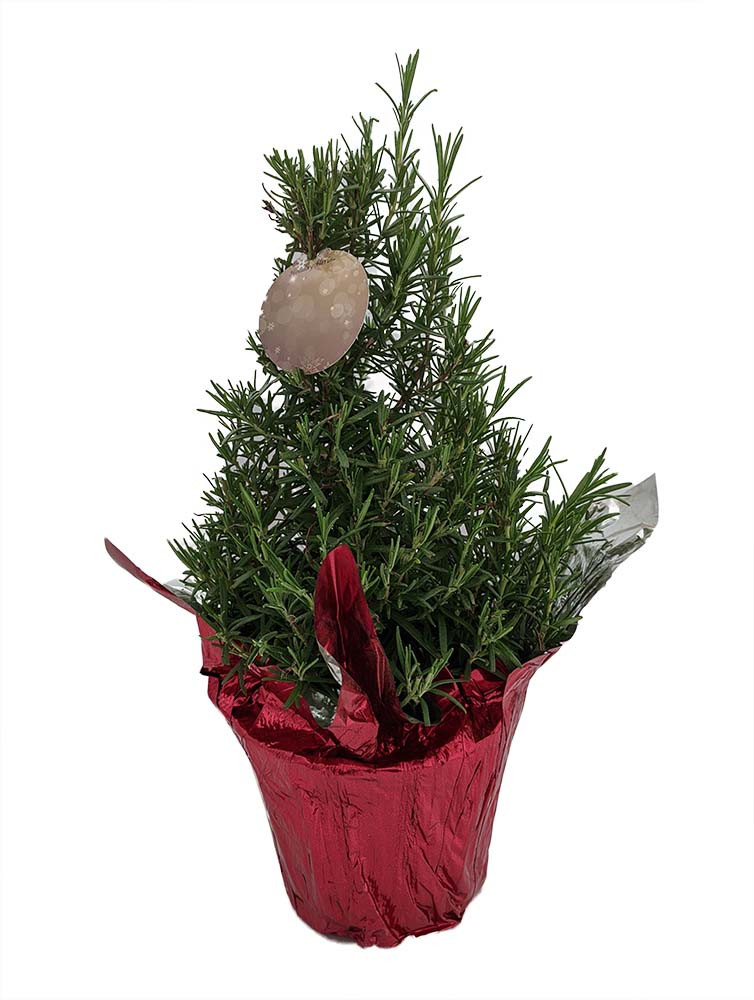 Rosemary (Rosmarinus officinalis) is a perennial herb native to the Mediterranean region and cultivated widely elsewhere. There are many varieties of Rosemary, each has its own unique wonderful aroma and appearance, but practically the same medicinal and culinary purposes. Most forms are low-growing aromatic, woody, branching, evergreen, shrubs of 4-6 feet in either upright, creeping or prostrate forms. The leathery leaves are narrow, needlelike, lance shaped, entire and up to 2 inches long. Leaves grow in opposite pairs alternating along the woody stem, sometimes close enough to appear as a whorl. The flowers are small, two lipped, the lower lip has 3-lobes, with the center lobe forming a shallow bowl. They occur in short axillary racemes at the top portion of the stems and range in color from white to blue, pink, purple or lavender. Blooming from May to July or later depending on climate and variety. Cultivation: Rosemary is easily grown in ordinary garden soil. It prefers a hot sunny position and a slightly alkaline light dry soil. Propagate by seeds, cuttings, and division of roots. It attracts bees and butterflies to the garden. It also makes an excellent house plant in a sunny window. Medicinal Uses and Active Constituents: Rosemary is edible and medicinal, the dry herb is also used as a flavoring in cooked foods. The flowers make an attractive edible garnish in salads. The fresh or dried leaves are brewed into a refreshing aromatic and medicinal tea. Research has shown that the plant is rich in volatile oils, flavanoids and phenolic acids, which are strongly antiseptic and antiinflammatory. The plant is noted for its fragrance, and is a source of Rosmarol, an extract from the leaves, has shown remarkably high antioxidant activity, used extensively in modern medicine. Rosemary herb is medicinal as an antiseptic, antispasmodic, aromatic, astringent, cardiac, carminative, cholagogue, diaphoretic, emmenagogue, nervine, stimulant, stomachic and tonic. Rosmarinic acid has potential in the treatment of toxic shock syndrome, whilst the flavanoid diosmin is reputedly more effective than rutin in reducing capillary fragility. A medicinal infusion is used internally in the treatment of colds, catarrh, headaches, gastric disorders, to reduce low fevers and soothe sore throat, to relieve flatulence, nausea, menstrual pain, and insomnia. Steam inhalation of the plant can be used for sore throats, and bronchial catarrh (inflammation of the mucus membrane, causing an increased flow of mucus). Should not be used by pregnant women since in excess it can cause an abortion. Externally, the oil is applied externally as a rubefacient, added to liniments, rubbed into the temples to treat headaches and used internally as a stomachic and nervine. Other Uses: Rosemary is said to repel insects from neighboring plants as well as branches or sachets of the leaves placed in clothes cupboards to keep moths away. It is also mixed with borax and used cold, to make one of the best hair washes known and is effective against dandruff, said to prevent premature baldness too. The leaves when burnt as incense are very fragrant and relaxing. The plant you will receive is approximately 12 inches tall growing in a 6" pot with decorative pot cover and tag. Pot cover and tag color and style will vary.