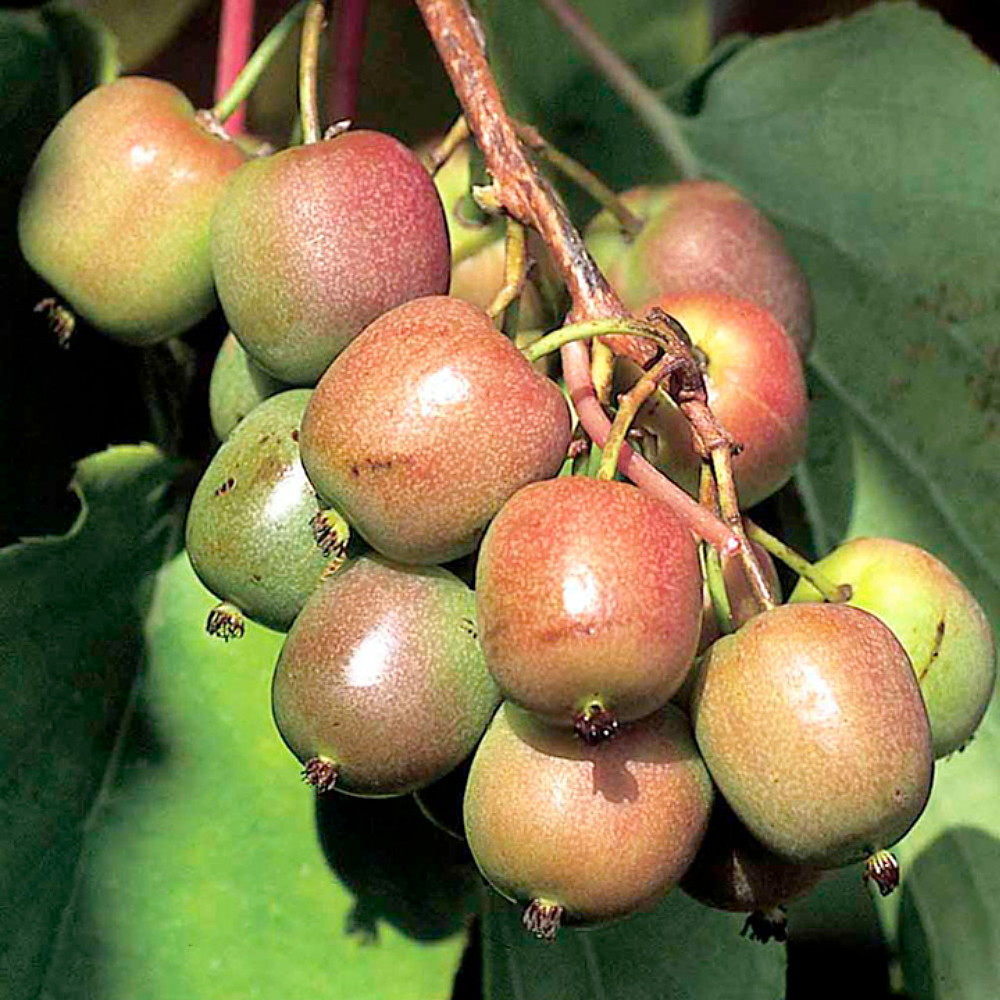 The Hardy Arctic Kiwi is THE FRUIT OF THE FUTURE. Fruits are now being marketed and sold in produce stores. It has been accepted in the marketplace and the demand will be growing in the very near future for the small delicious fruits. The Hardy Kiwi, are native to the mountains and hills of southwestern China where they grow wild in trees and on bushes. The Hardy Kiwi was introduced to the United Kingdom, Europe, United States, and New Zealand between 1900 to 1910 from China. Commercial plantings were made in New Zealand about 1930 and have become widespread over the last 20-30 years. These plants have been tested in New Hampshire and upper New York State where they survived 25 degrees F below zero temperatures! Kiwi plants are attractive growers that require a sunny location, preferably with wind protection. They can be grown in different types of soils; however, the soil must be well drained. The vines take very little maintenance-just pruning and support to hold about 100 lbs. of fruit for a mature plant. Plant 10 to 20 ft. apart. They are hardy in zones 5-8. Kiwi plants are very pretty when used to cover a wall or fence or used in landscape design. The fruit is very high in Vitamin C and its use in recipes is endless. The hardy Kiwis ripen in mid to late September. Two Hardy Kiwi Plants are necessary to get fruit, a male and female. One male plant can pollinate several female plants. Geneva Hardy Kiwi is a vigorous A. Arguta female vine tested at Geneva, New York Experiment Station. Geneva Hardy Kiwi seems very hardy and will produce delicious, smooth-skinned, medium-sized fruit. Should be pollinated with male Meader Kiwi. Hardiness Zones 5-8. If you like Fuzzy Kiwis, you’ll love this new and delectable fruit Sparkling like green or red jewels, each very sweet fruit is packed with flavor. While smaller than Fuzzy Kiwi, you can eat fuzzless Hardy Kiwi fruit like grapes, tender skin and all. Hardy to minus 25º F., or below and free of pest and disease problems, you can harvest 100 lbs. or more of fruit from one Hardy Kiwi plant. Hardy Kiwi likes half day to full sun and well-drained soil. A male plant is required for pollination and one male plant can pollinate up to 8 female plants. Hardy Kiwi ripens in mid to late September. The plants need a strong trellis and can spread 10-12 ft or more when mature. They usually begin bearing 3-4 years after planting