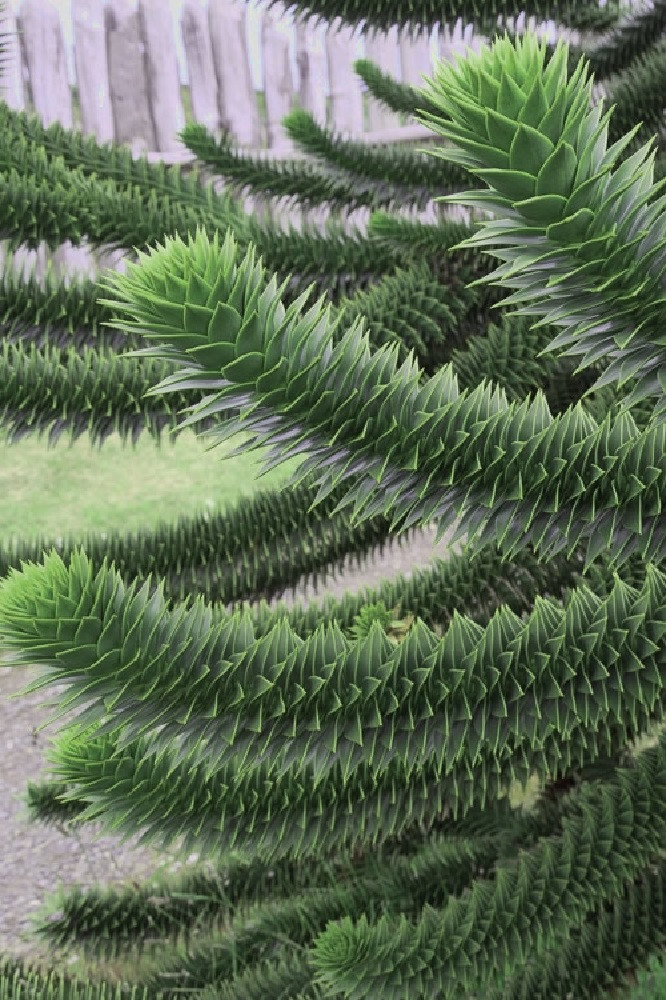 Monkey puzzle tree, (Araucaria araucana), also called Chile pine, an evergreen ornamental and timber conifer of the family Araucariaceae, native to the Andes Mountains of South America. Although the tree was declared a natural monument in Chile in 1976 to afford it protection from logging, the species is considered endangered in its native habitat because of illegal felling activity and habitat fragmentation. The monkey puzzle tree may grow to a height of 45–50 metres (150–164 feet) with a diameter of 2.5 metres (8 feet) and may live for more than 700 years. Its spiral arrangement of rigid needle-pointed leaves along stiff branches inspired its common name, evoked by a comment about the challenge this prickly network might pose to climbing monkeys. The plants are usually dioecious, meaning male and female cones are most commonly borne on separate individuals. The female cones are somewhat spherical in shape and can produce about 200 edible seeds. Winter hardy to USDA Zone 7-10 where it is best grown in deep, moderately fertile, evenly moist, well-drained soils in full sun to part shade. Trees perform well in a variety of different soils as long as they are well-drained. Trees perform much better in Mediterranean-type climates with mild summers than in climates with hot summers. In St. Louis, trees may be grown in containers that must be overwintered indoors. In winter, site plants in bright indirect sun in areas with cool temperatures. Mist foliage regularly. It typically grows to 20-30' tall in cultivation, but may reach 90-130' tall in its native habitat. It is noted for its unique shape. Trees are loose-pyramidal and open when young, but develop an umbrella-like crown with loss of lower branches as they age. Horizontal, upward-arching branches appear in whorls around the trunk with rope-like branchlets. Bark is gray-brown and ridged. Dense, leathery, triangular, radially-arranged leaves (to 2" long) have sharp points. Individual leaves persist for 10 to 15 years. Trees are dioecious (separate male and female trees). Female cones (to 6" long) take 2-3 years to mature, disintegrating at maturity to release the nut-like seeds (each to 1 1/2" long). Seeds (pinones) are edible and reminiscent of pine nuts. The tree is endangered in Chile today and is now protected under Appendix I of CITES (Convention on International Trade in Endangered Species of Wild Fauna and Flora). Indoors grow in a sunny window and keep evenly moist, not wet or dry. The plant you will receive is growing in a 2" x 4" growers pot, similar to the second photo. Approximately 3-4" tall from the soil line up.